Camilla, the Queen consort, looked solemn but stoic as she joined her husband, King Charles III, for the Queen’s vigil in Edinburgh this evening.

The Queen Consort sat beside the Countess of Wessex on benches opposite the Queen’s coffin, where King Charles, Princess Anne, Prince Andrew and Prince Edward stood.

Camilla, 75, and Sophie, Countess of Wessex, 57, looked gloomy as they looked at their husbands, who stood with their hands clasped and headed toward the ground.

Camilla, the Queen’s consort, looked majestic as she attended a vigil for the late Queen Elizabeth II at St Giles’ Cathedral in Edinburgh

The wife of King Charles III has remained by her husband’s side since the loss of the Queen, providing him with support and care.

During the vigil, she looked at the coffin for a while before bowing her head and looking away.

She kept her emotions under tight control despite the gravity of the situation.

Members of the public continued to file their files at St Giles’ Cathedral, where Her Majesty’s coffin lies in the state.

After the 10-minute vigil, Camilla left the cathedral alongside her husband, and walked up the stairs next to him.

The couple made a string of high-profile appearances in the days after the Queen’s death at the age of 96. 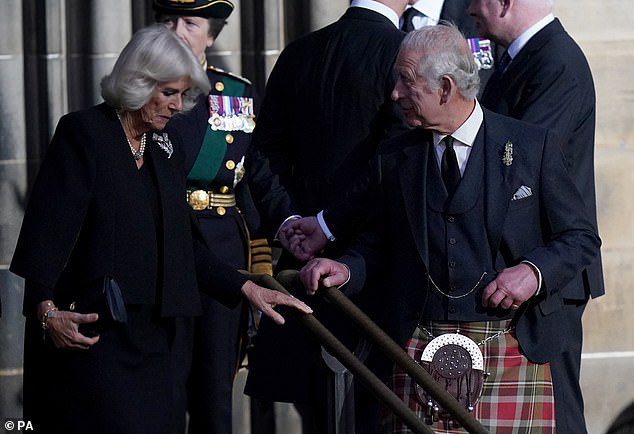 Camilla, 75, has been at her husband’s side since his mother’s death on Thursday, September 9. She joined him on the Eve of the Princes, along with his three brothers 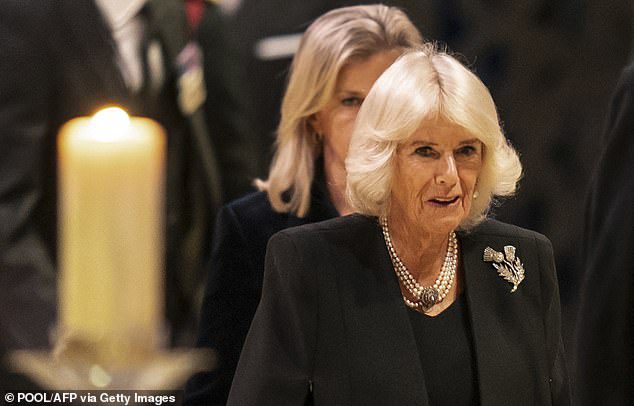 Camilla wears a black midi dress for a vigil, with a matching jacket, a large pearl necklace and a thorn brooch 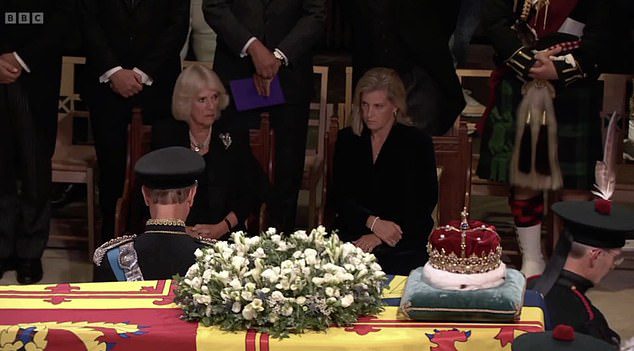 Sophie, Countess of Wessex, joined the Queen Consort at St Giles’ Cathedral. The husband looked solemn and only looked at the coffin for a while

Charles praised his wife’s unwavering support in his first speech as king.

After a short procession, King Charles III, Anne, the Princess Royal, Prince Andrew and Prince Edward all stood on one of the four corners of the oak sarcophagus with their heads bowed in a ceremony known as Princes’ Eve.

The Duke of York kept his eyes closed for a while during the 10-minute vigil, while the Princess Royal and the Earl of Wessex fixed their heads toward the ground. The King – his eyes wet – kept his hands clenched and also looked toward the ground as the members of the crowd advanced.

The king and his family stood alongside four of the Royal Company of Archers in uniform, standing guards in tall feathered hats and armed with arrows and shivers. 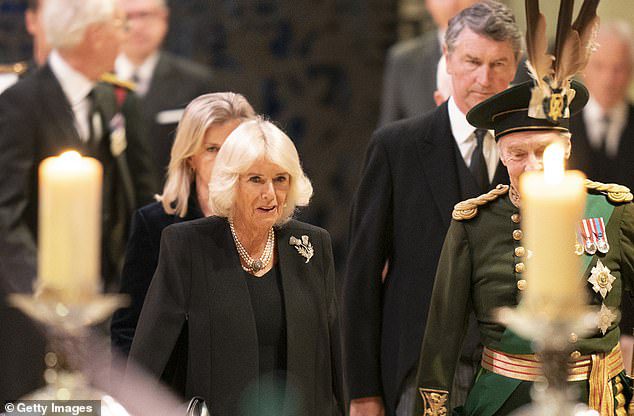 Camilla, Queen Consort arrives to hold a vigil at St Giles’ Cathedral, in honor of Queen Elizabeth II as members of the audience pass by. 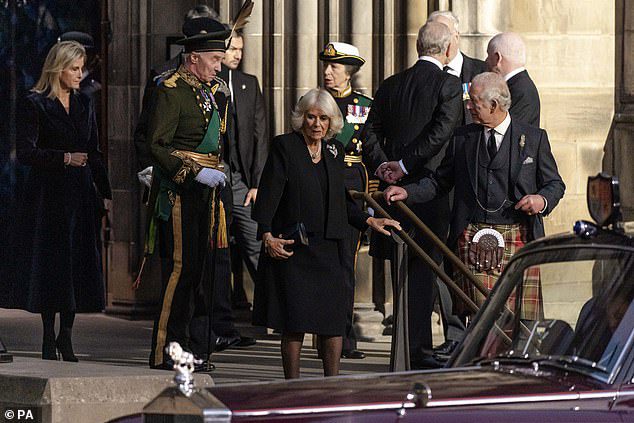 The Countess of Wessex, the Queen consort, the Princess Royal, the Duke of York and King Charles III Eve St Giles’ Cathedral, Edinburgh, after participating in a vigil while the coffin of Queen Elizabeth II was resting 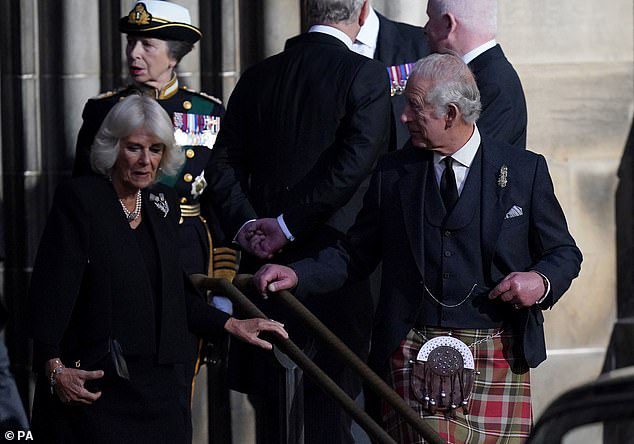 Camilla looked frustrated when she left the cathedral after the service, returning to rejoin her husband, King Charles III

Earlier in the day, the Queen Elizabeth attended the Queen’s Thanksgiving Service in Edinburgh alongside King Charles III, his brothers the Countess of Wessex and Princess Anne’s husband, Vice Admiral Sir Tim Lawrence.

As the Queen’s coffin was on its way to St Giles, Camilla followed the procession by car, where she was captured looking frustrated.

As the coffin was lifted from the heart, the queen looked pensive.

He was carried through the cathedral, where the choir sang, you will keep him in complete peace, whose mind remains on you.

Then the queen’s coffin was placed on a wooden coffin with the devotees still standing.

At this point, the King, Queen Consort, and other members of the royal family walked to their seats by the coffin.

Tomorrow the Queen will take her last trip to London, where she will be followed by King Charles III and Camilla. 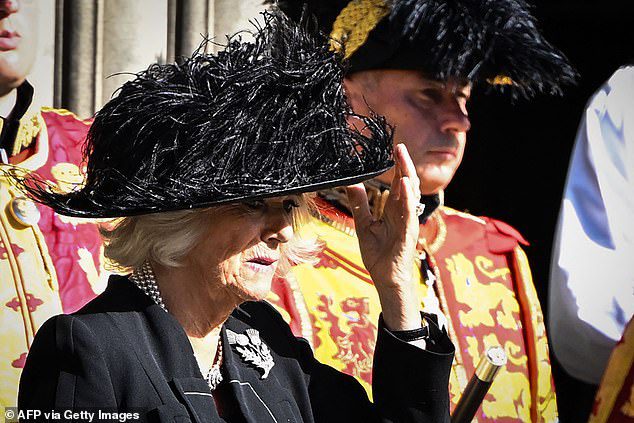 Camilla, the Queen consort, looked sad as she attended a thank-you service to the Queen in Edinburgh 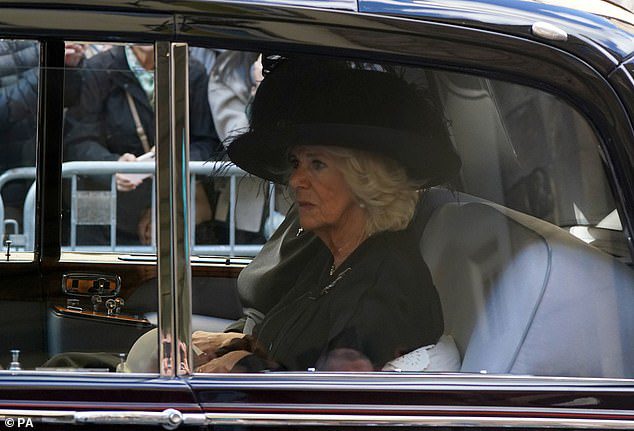 Camilla, 75, looked emotional as she followed the procession of Queen Elizabeth’s coffin by car from Holyrood Palace to St Giles’ Cathedral earlier today. 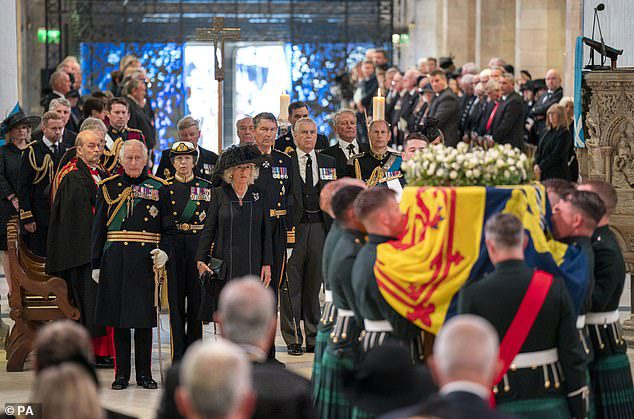