A view of sunrise from the Artemis I Space Launch System (SLS) and Orion spacecraft at Launch Pad 39B at NASA’s Kennedy Space Center in Florida on April 11, 2022. Fog rises from a nearby stream. The SLS and Orion were moved over the portable actuator to the board on the 2 crawler carrier for a pre-operation test called wet clothes training. Artemis I will be the first integrated test of the SLS and Orion spacecraft. On subsequent missions, NASA will land the first woman and first people of color on the Moon, paving the way for a long-term presence on the Moon and serving as a stepping stone on the path to Mars. Credit: NASA/Ben Smegelsky

Teams concluded their rehearsal test today at approximately 5:10 p.m. EDT after noticing a liquid hydrogen (LH2) leak on the Secret mast service tail, which is located at the base of the moving actuator and is connected to the main stage of the rocket. The leak was discovered during liquid hydrogen loading operations and prevented the team from completing the test.

Before concluding the test, the teams also met test objectives for the temporary cryogenic propulsion stage by cooling the lines used to load propellant to the upper stage. No propellant flowed into the stage due to a problem with a helium check valve that was identified several days ago. 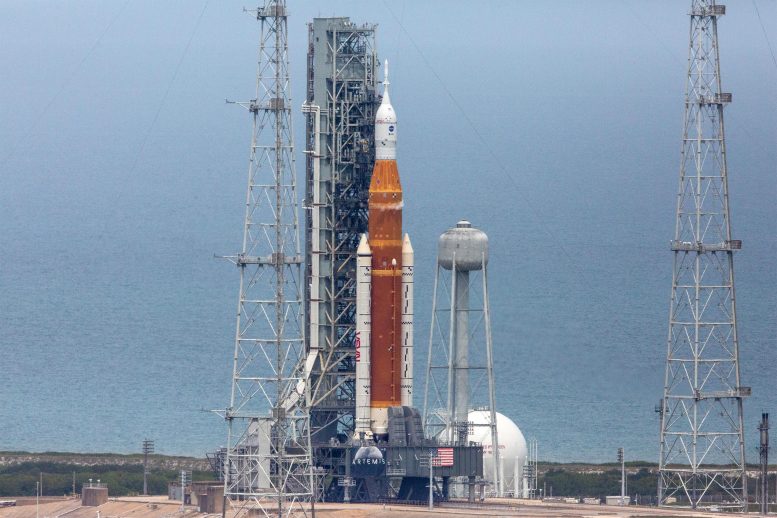 The Artemis I Space Launch System (SLS) and Orion spacecraft are seen atop the launch pad on Launch Pad 39B at NASA’s Kennedy Space Center in Florida on April 14, 2022, during a pre-launch test called Wet Dress Rehearsal. Artemis I will be the first integrated test of the SLS and Orion spacecraft. Credit: NASA/Ben Smegelsky

When the teams stopped loading the propellant, the liquid oxygen tank in the rocket’s primary stage was 49% full and the liquid hydrogen tank was loaded to about 5% before the hydrogen leaked out.

The teams are now working to offload the fuel from the rocket. They will examine the confidential communication, review the data, and develop a plan moving forward to address the hydrogen leak.

NASA It plans to host a teleconference on April 15 to provide updates on troubleshooting and next steps for a wet clothes rehearsal test.